It's been a long time since the last update...

It's been a long time since the last update, and there have been a number of changes.

I went bicycle camping again last weekend, and it was a rousing success, even tho there were a few screwups.

I've got no pictures, it was fairly spur-or-the-moment, and I didn't think to take any.

In the mean time, and while the weather has been rainy, I needed a new indoor project, so I purchased a 3d printer kit.  It was sold as an alunar, but it's a Prusa I3 clone.  Was an early Father's Day gift from my kids. ;)

I had my neighbor over, and we had a six pack and built the printer.  I was so excited, I only took one picture during the build process, but over the course of the weekend, all the bugs got sorted, and printing started. 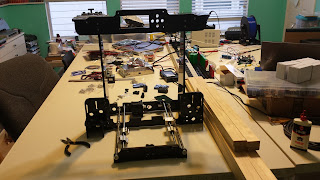 After printing out the test shape that came with the printer, I printed a few more things for fun. 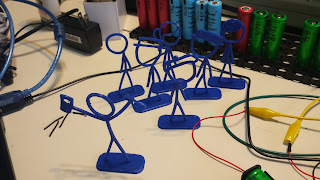 So, as a first project, I have decided to build a CNC machine.  I'm going to follow the MPCNC guide, and see what happens. 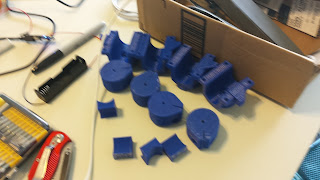 First prints.  They ran overnight, and I discovered that I had some print issues.  My spool wasn't properly mounted, and so would cause the occasional tension which appeared as waves in the print. Still accurate enough for my needs, but I printed a bearing supported spool holder and the issue has cleared up. 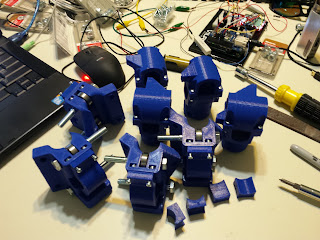 So, I went and got some bolts, bearings and whatnot, and I've printed up some of the bits.

Don't mind the arduinos and LiIon cells in the background, that's other projects I'm working on that I haven't shared yet.
Posted by Egroeggnik at 9:21 PM No comments: